When I first decided to stay at the Brunelleschi in Florence I had no idea how much history and fame the hotel had garnered. Not only is the Brunelleschi an exquisite four star hotel in Florence, but also has been mentioned in the famous Dan Brown Novels. The hotel combines comfort, European charm and a touch of class all so beautifully.

I stayed at the Brunelleschi Firenze for two nights while I explored Florence, and loved staying in the hotel and being so close to some of the main attractions. The Duomo was only 1-2 minutes walk away and even better, I could see it from my bedroom window. 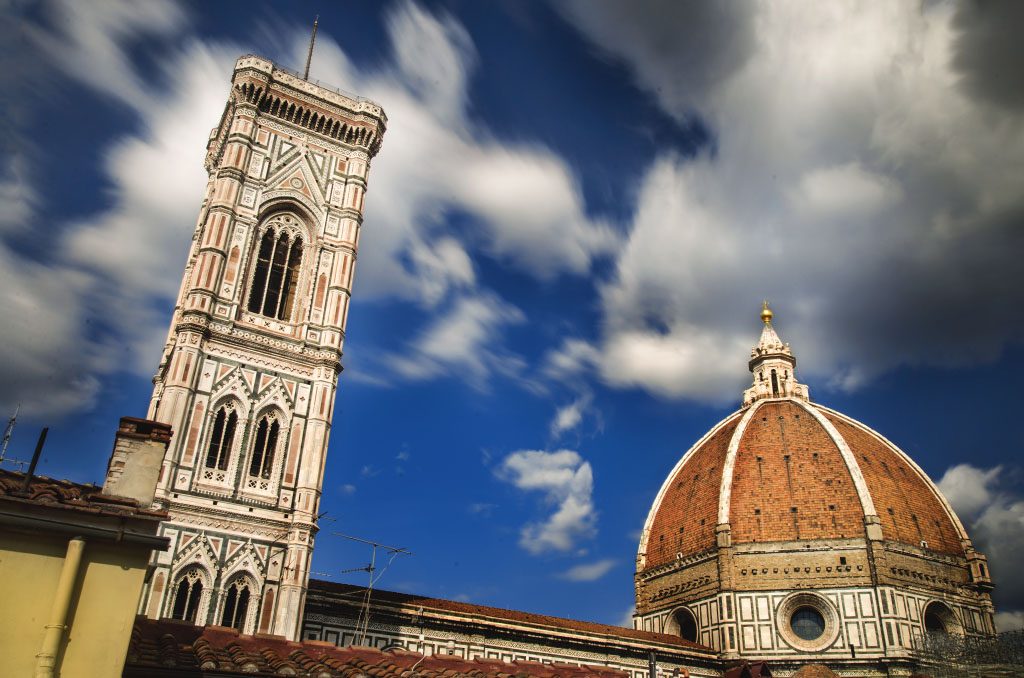 The Brunelleschi is centrally located in one of the main tourist areas only a 15 minute walk, or 5 minute taxi ride from the main train station. Personally, I would recommend taking a taxi to the hotel for two reasons. Firstly, as there are cobble stones in Florence, which can make maneuvering your luggage difficult, and secondly because you may get lost in the winding alley ways.

The location was perfect, as I mentioned above. We were right next to the Duomo and were able to walk to all of the other sights we wanted to visit. While the cobblestone streets were a little a confusing to navigate at first, we loved walking through them and seeing cute Italian restaurants at every turn.

Once we had arrived at our hotel, we checked in roughly 15 minutes before guaranteed check in time and were taken to our room. We found the staff to be friendly and professional during the check in process. 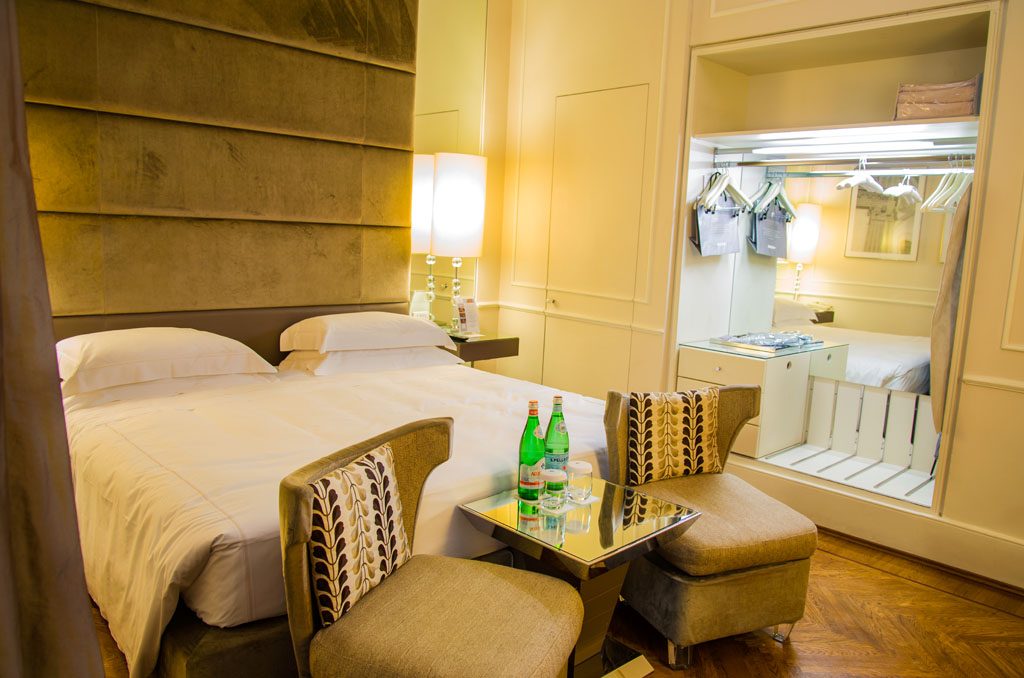 One of the coolest things about the Brunelleschi is that different parts of the building come from different period in time – which leads to what we’ll tell you next.

Depending on the room you’re in, you may have to take two separate elevators to get to the higher floors. This is due to certain parts of the building being built at different times. You catch one elevator up one level from reception, then walk through a short hallway to get to the second elevator, which goes up to the higher rooms.  It didn’t bother us, but seems important to note. 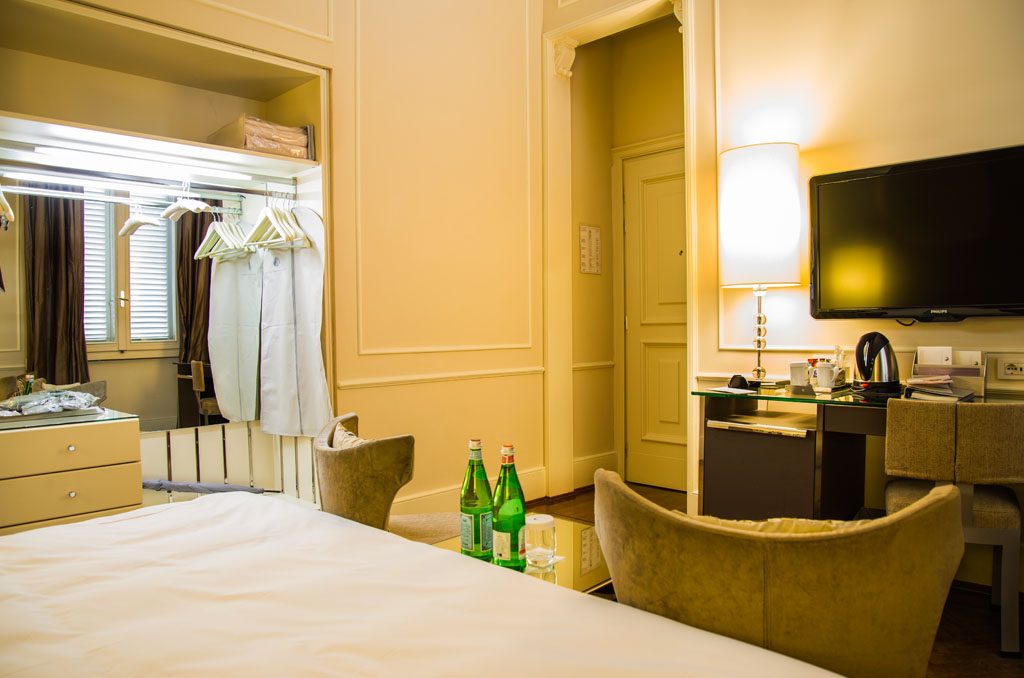 We spent our two nights in Florence in a deluxe double room with a spectacular view of the city’s Duomo. The room had ample storage space, a large comfortable bed, a desk and two cosy chairs to greet us after our long day of traveling.

The view of the Duomo was a great thing to wake up to every morning, reminding you even prior to leaving the room, that you are in Florence – a great artistic city. 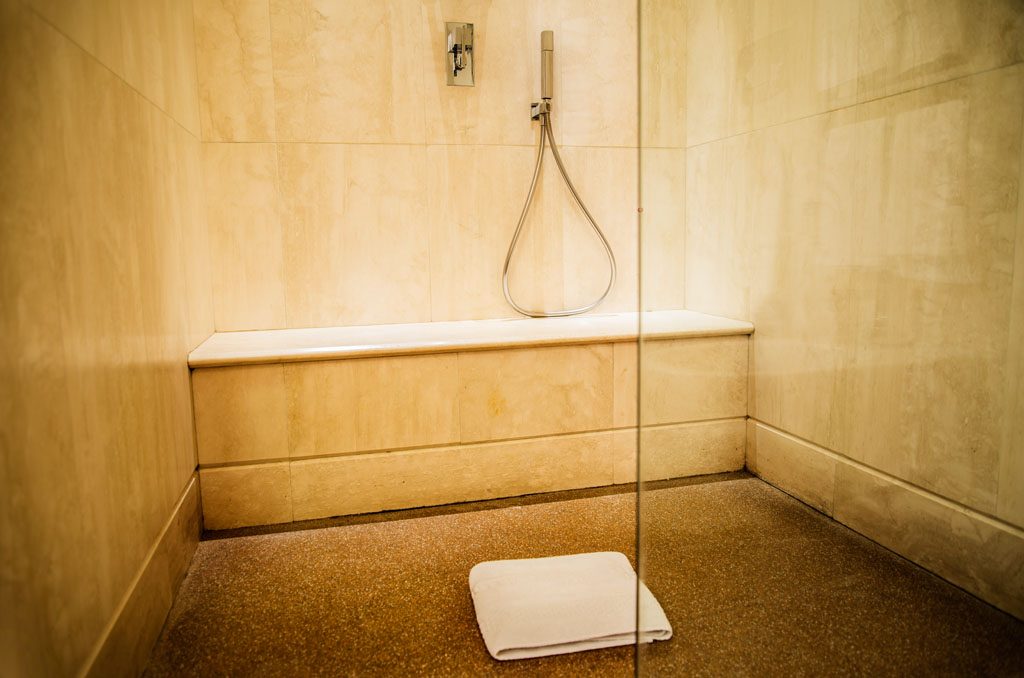 The bathroom was clean and modern, with his and her sinks (the dream!), lots of space and the biggest shower I had ever seen in my life. The shower area was so big that there was even a bench for sitting (or evening lying down). It was also stocked with shampoo, conditioner, body wash and moisturizer.

If you are looking for a one of a kind room however, the Brunelleschi offers a more expensive split level room which includes a spa bath downstairs, and a jacuzzi upstairs with epic views of the casino. You can find pictures on their website. 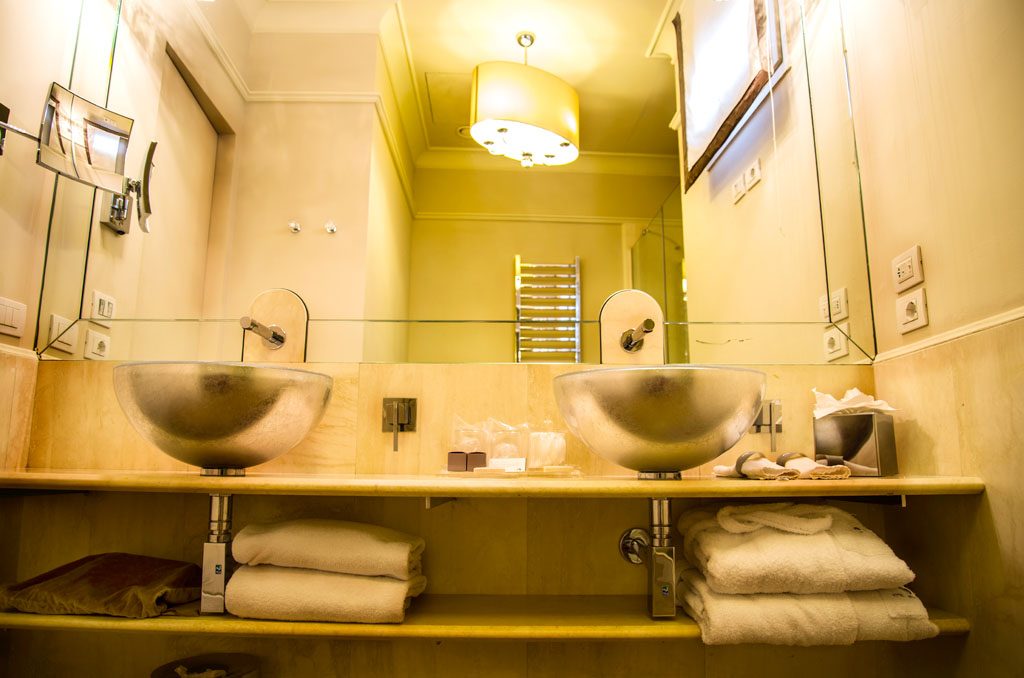 Notable room features (of the room we stayed in):

The breakfast buffet was housed in both parts of the building however we only ate in the upstairs one (we were told there was also an area downstairs). The selection was good with a range of different offerings – croissants, cereals, yogurts, fruits and cold cuts. The waitresses in the buffet room were also able to offer a great selection of teas for us to drink while we were eating. 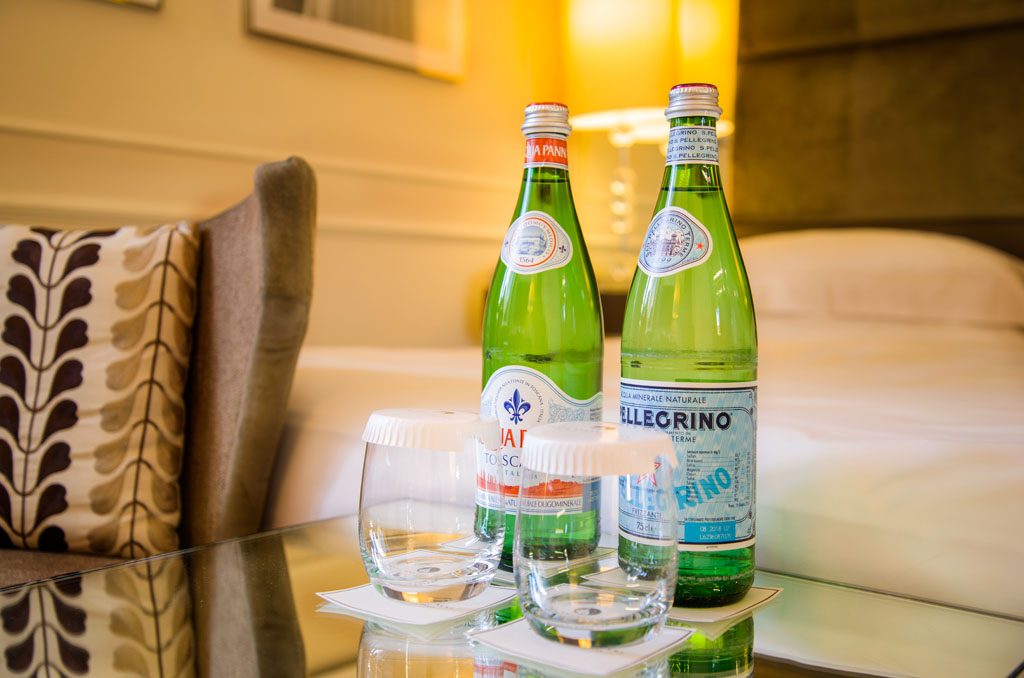 The Brunelleschi is a four star hotel and an exceptional one at that, with twice daily room cleaning, attentive service, and a shower bigger than some hotel bathrooms. We had help with our bags on both the way in, and out, which was helpful. The staff were always willing to help, while at the same time they weren’t intrusive as they provided you with enough space to go about your activities.

The Brunelleschi has been immortalized in two Dan Brown book’s, including the Da Vinci Code, making it world famous. In the Da Vinci Code, the main character Langdon refers to the hotel as living in luxury during a final conversation, and again in Inferno, as the book described him inside, and exiting the hotel.

It’s also been the home of a press conference for Jersey Shore and has been named in awards by Conde Nast.

History And A Musuem 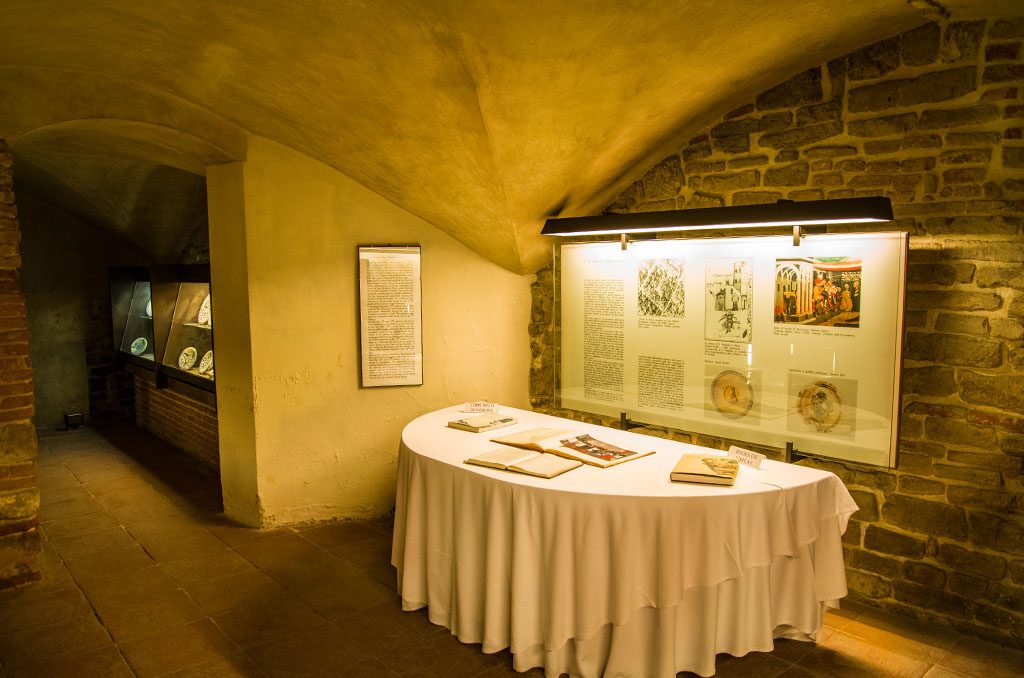 The Brunelleschi gets it name from a past owner named Filippo Brunelleschi who was an important artist in Italy. Since then the (original use) church and tower have passed by many hands and have changed their purpose.

Over time the building has been used as a medieval church (1100s), baths, and even a women’s prison (12th Century) before eventually being changed into the hotel it is today.  The Pagliazza Tower is estimated to have been built back in the 6th or 7th century, either built by the Byzantines or the Lombards. In present day, these two parts have been joint together to make up the Brunelleschi Hotel.

You can learn more about the Hotel’s history by having a look around there small museum, even if you’re not a guest.  In the museum there were artifacts that had been saved over the years as well as an area where you can see some of the ancient baths. 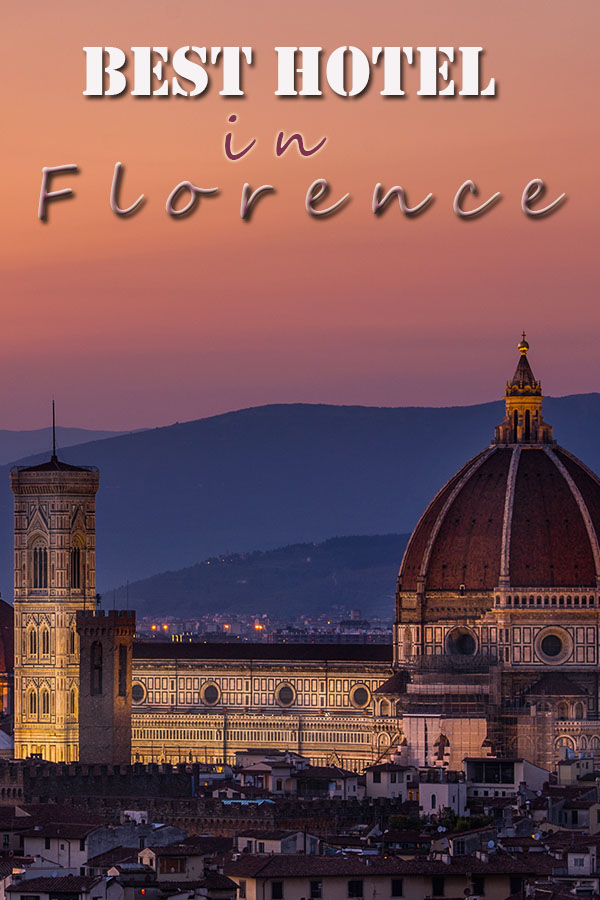 Rates for the Deluxe Double room are around USD368 a night, but it’s best to check the website for exact prices due to seasonal differences. See the latest prices by clicking here.

I recorded a few videos and wrote some articles of my time in Florence. Find them here:

Best Things to do in Brindisi, Italy

Best things to do in Brindisi, Italy: Located in the Apulia region on the...

This website uses cookies to improve your experience while you navigate through the website. Out of these, the cookies that are categorized as necessary are stored on your browser as they are essential for the working of basic functionalities of the website. We also use third-party cookies that help us analyze and understand how you use this website. These cookies will be stored in your browser only with your consent. You also have the option to opt-out of these cookies. But opting out of some of these cookies may affect your browsing experience.
Necessary Always Enabled

Any cookies that may not be particularly necessary for the website to function and is used specifically to collect user personal data via analytics, ads, other embedded contents are termed as non-necessary cookies. It is mandatory to procure user consent prior to running these cookies on your website.